Wait, What? Katrina Pierson Somehow Lays 9/11 at the Feet of the Clintons 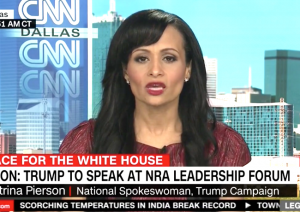 Donald Trump spokesperson Katrina Pierson came out in full swing on Friday afternoon during a live TV hit with CNN’s Ashleigh Banfield during Legal View. As the focus of her boss’ campaign has shifted towards the general election, it is the legacy of Hillary and Bill Clinton that is often being called into question, and Pierson did not mince words on that subject Friday.

As soon as Banfield noted that the former Secretary of State identified Trump’s proposed Muslim ban as dangerous to our global alliances, Pierson agreed with Trump’s response on Fox News this morning, which was, “To me it’s one of the dumber statements I’ve ever heard.”

“Well, I’ll have to agree with Mr. Trump,” responded Pierson, “to say it is the dumbest statement I’ve heard, particularly when we look at what’s happened in the world.”

The controversial spokesperson than processed to rope in former President Clinton and his policies into the mix, by continuing:

“It was then Bill Clinton who admitted back in 1996 he knew Bin Laden wanted to commit crimes against America and did absolutely nothing. More importantly, we had open borders, a lax visa system. We were nice. Our tone was welcoming. And guess what? 9/11 happened.”

As is widely expected for the general election battle, Pierson’s rhetoric was fiercely divisive against both Clintons. She continued, “It was while she was asked the Secretary of State under her watch where isis grew and we armed the enemy. if anyone is unfit to be president, it is Hillary Clinton.”

Watch the above clip from CNN.
—
[image via screengrab]