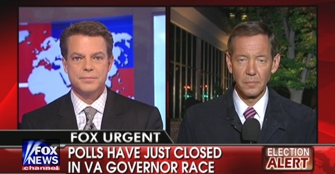 Highlighting even further the ratings erosion at CNN in prime time, the “Most Trusted Name in News” finished in fourth place among cable news outlets during election coverage last night.

Fox News was #1 by a mile, followed by MSNBC, then CNN sister network HLN and CNN in 4th place. They were fourth in both total viewers and the A25-54 demographic.

CNN’s 4th place finish last night was only made more glaring because last year’s election coverage on the network was their best night of all time. They didn’t just have more viewers than every other cable news network last year – it was the most of all time.

FNC topped MSNBC, HLN and CNN combined in total viewers and in the demo. HLN edged MSNBC in the demo as well during prime time. We’ll have more numbers coming.

But CNN finished 4th, behind HLN, which didn’t cover the election last night. From 8-10pmET, CNN arguably covered the election more than any cable news network (after 10pmET, it was probably Fox News). Meanwhile, their competition was the usual competition from FNC and MSNBC, with some election results rounding out the opinion-driven programs.

CNN has argued that when news is the focus, their journalistic slant will win out over opinion. Last night, quite obviously, this didn’t prove to be accurate.