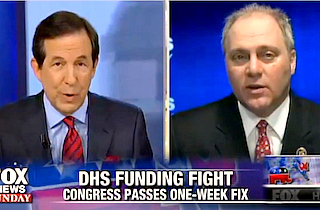 The House was unable to pass a three-week extension of funding last Friday, and was bailed out from a DHS shutdown by House Democrats, who approved a one-week funding extension. If the House won’t pass a “clean bill” this week to fund the DHS without any riders related to Obama’s immigration order, Senate Democrats will block it, and the mess will repeat itself. “Won’t you be in exactly the same fix that you were in last Friday?” Wallace asked.

Scalise denied that Boehner would propose a “clean bill” — “there is no such bill” — and instead argued that the House wanted to force the bill into conference committee, where legislative compromises could be made outside of the larger vote.

“There was a vote for full funding on Friday, and we rejected it,” Scalise said. “The Senate will have a vote on the floor Monday afternoon to go to conference…We’re gonna keep fighting this battle.”

Wallace pointed out that Senate Democrats would not agree to that, causing Scalise to call on viewers to “light up the Senate switchboards.”

“It’s your job to put the best face on things, but people are talking about what happened Friday night as a ‘humiliating defeat,'” Wallace said. “You were defeated by your own caucus. What happened?”

“Our members have a lot of differences on how we go about tactics, but our goal is the same…and we’re now in the position to force the Senate to go to conference committee, which was what we wanted to do all along,” Scalise said, causing Wallace to remind him Senate Democrats would block that measure, and the whole thing started all over again.

Wallace also asked about rumors that the conservative caucus that killed last week’s bill was plotting a coup against House Speaker John Boehner. “Obviously he’s speaker, he’s going forward, and he’s working hard to get our agenda moved through the House,” Scalise said.