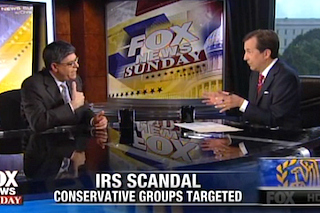 The IRS scandal—which had receded in recent weeks after an audit by the Inspector General revealed progressive groups were scrutinized in addition to conservative organizations, and produced no evidence linking the behavior to a political appointee—was revived this week when President Barack Obama’s invoked “phony scandals” in his speech in Galesburg, Illinois.

Lew was directed by Obama to follow up on the Inspector General’s report. Wallace challenged Lew to defend the thoroughness of his investigation into the IRS’ behavior, and ferociously pursued Lew’s answered.

“We went through to find the facts,” Lew said. “It was equal opportunity bad judgment. It was conservative groups, it was progressive groups.”

“There are an equal number of groups, but the bad judgment was equal opportunity,” Lew said. “There were a number of supervisors, all career, who exercised bad judgment, who were relieved of their responsibilities. I think what happened there was unjustifiable…[But] there’s no political official who condoned it or authorized it.”

Wallace invoked the testimony of Carter Hull, an outgoing IRS official, who has said he was ordered to send tea party applications to the chief counsel’s office. The chief counsel, William Wilkins, is one of two political appointees in the IRS, and reports to the Treasury Department.

“To be clear, there are 1600 lawyers in the chief counsel’s office,” Lew said. “There was no suggestion that this went to the one political person in that office. There’s no evidence of it, there has been no evidence of it.”

“Wait a minute!” Wallace said. “Have you asked him?”

“Has somebody in the Treasury Department asked William Wilkins what he knew about this?” Wallace said.

“Chris, there is no evidence that this went to any political official.”

“An awful lot of time has gone into asking a lot of questions of a lot of people,” Lew said. “I’m not saying it’s done. We will cooperate with all of the ongoing investigations. We have and will. I’m just challenging you’re assertion that something has been shown, when no evidence has been produced to show it.”