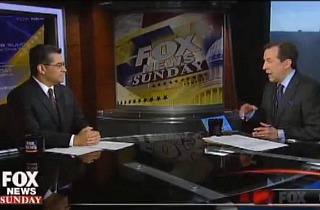 Fox News Sunday host Chris Wallace sat down with Rep. Xavier Becerra (D-CA) and Sen. Mike Lee (R-UT) for a debate over where President Barack Obama derives the authority to delay key provisions of the Affordable Care Act. Wallace grilled Becerra over why Congress is allowing Obama to do this and Lee over why Republicans do not take the president to court over these delays.

“If this were against the Constitution, someone would have sued by now,” Becerra said of the series of delays. “The reality is, the president has used his executive powers less often than almost every president before him.”

Wallace asked why Becerra, “as a congressman,” seems content to allow the president this broad authority. “The president has never said I’m going to go it alone,” Becerra said. He added that Congress has refused to perform and it is incumbent on Obama to act where Congress won’t.

Wallace interrupted Becerra and insisted that the Constitution says that the president does not have the authority to reinterpret law as broadly as he appears to be. “I would hope that we would never have a chief executive who would twiddle his thumbs because Congress can’t get its act together,” Becerra replied.

Wallace turned to Lee and noted that Obama has used executive orders less than the last four two-term presidents. He asked why the president cannot be taken to court.

Lee replied by noting that “it’s difficult” to identify a plaintiff who could assert standing before a court in order to bring a case against the president.

Wallace asked why a legislator cannot demonstrate standing by insisting that Obama is ignoring existing law. Lee did not disagree with this assertion. He added that it was “wrong” for the president to be reinterpreting the law.