Wallace Grills DeMint Over Shutdown Threat: ‘Don’t Take A Hostage Unless You’re Prepared To Shoot Them’ 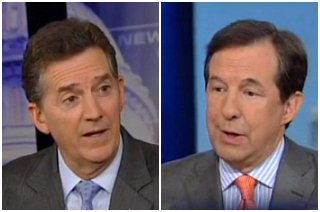 On Fox News Sunday, host Chris Wallace went after former Senator and current Heritage Foundation President Jim DeMint for the threats emerging from the conservative wing of the Republican Party to shut down the government over Obamacare funding, noting that even many GOP lawmakers had called the strategy “crazy” and suicidal.”

“This may be the last opportunity to stop it,” DeMint responded. “There’s no Republican that I’m aware of who wants to shut the government down. The whole point is we need to fund the government but we should not fund Obamacare, as this is a temporary funding mechanism that’s coming up in September. This is a statement—”

“You don’t take a hostage unless you’re prepared to shoot them,” Wallace pressed. “Are you prepared to shut down the government?”

“If Obama would not accept the funding bill that fully funds the government because it didn’t have his failed law in it, then he would be shutting down the government,” DeMint said. “I’m convinced the more Americans know about Obamacare, the more they’re going to stand with those of us who want to stop it.”

Though he was what Wallace called “disappointingly diplomatic,” Bill Kristol criticized DeMint’s strategy. “I think there are more intelligent and perhaps more ways tactically to fight than simply saying, ‘We’re going to defund all of Obamacare and voting for any continuing resolution that doesn’t fully defund Obamacare is surrender,'” he said. “It’s going to be very hard to fully defund Obamacare with President Obama as president.”

“This GOP infighting is taking focus off problems with the law, and putting it on deep divisions within the Republican Party,” Howard Kurtz argued. “A lot of mainstream Republicans are upset, even angry at what you might call the bomb-throwing wing of the party for these kinds of threats…This is feel good politics, it’s a political statement, it makes your base feel good, but ultimately it disappoints those who are on your side. When you only control one half of the legislative branch, you can’t force your will on the rest of it.”