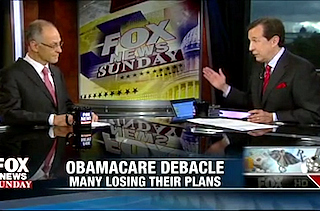 Ezekiel Emanuel, one of the principal architects of the Affordable Care Act, appeared on Fox News Sunday and strongly debated host Chris Wallace and American Enterprise Institute’s James Capretta over President Barack Obama’s “if you like your plan, you can keep it” pledge. The pugnacious Emanuel so loudly argued over his opponents that Wallace got tongue-tied at one point and told Capretta, “Don’t talk while he’s interrupting!”

Wallace fought back against Emanuel’s argument that the grandfather clause, which allows people to keep any insurance policy acquired before March of 2010, was a fulfillment of Obama’s promise.

“Your grandfathering is so narrow,” Wallace said to Emanuel, “if your insurance company changes your co-pay by more than $5 over the course of the three years since 2010, it’s no longer grandfathered in.”

“That’s usually a 25% change,” Emanuel said. “That’s a big change…You have to ask the question: how many planks do you change in a boat before it’s a different boat? That’s the same thing here: we had a plan, we argued about it.”

“You didn’t tell the American people,” Wallace said. “You said, if this plan is in effect until March of 2010, you can keep it.”

“That’s what it said!” Emanuel said. “That’s how we fulfilled that pledge.”

Wallace continued to press Emanuel on a variety of issues, including why the government gets to mandate minimum insurance coverage for people who may not need it, and the number of large employers dropping insurance policies, effectively forcing employees onto the federal exchanges. “Simple question,” Wallace said to Emanuel. “Are those people going to be able to keep their coverage, as the President promised?”

“The law does not say, ‘Sears, drop coverage!'” Emanuel said. “Sears decides what’s good for Sears. The law doesn’t say to the insurance industry, ‘You drop coverage!’ The insurance industry decides how to make money. When the private companies decide that they’re going to drop people or put them in the exchange, you decide to blame President Obama. He is not responsible for that.”