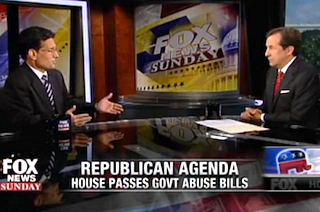 “You talk about creating jobs, you talk about growing the economy, but you have spent the last week in the House on passing your agenda, a series of bills called Stop Government Abuse,” Wallace said. “Is what you’ve been doing the best way to spend Congress’ time when you’re about to go on a recess for five full weeks?”

When Cantor tried to defend some of the laws the House had passed, including a measure to prevent “bureaucrats” from receiving bonuses, Wallace pressed him.

“Rightly or wrongly, none of these bills you’ve passed is going to become law,” Wallace said. “Your own members say they’re not going to pass the Senate, the president won’t sign them. Let’s talk reality. You haven’t passed the Farm Bill. You’ve only passed four of the twelve appropriations bills you’re supposed to pass. We face a government shutdown and a debt limit in the fall. Is this the best way to spend your time, passing bills that aren’t going to become law?”

“You’ve got the president out giving campaign speeches again, as if we’re in the middle of the election again,” Cantor objected.

“Tend to your own knitting,” Wallace replied. “You could pass a Farm Bill. You have the power of the purse! Only four of the twelve appropriation bills have even passed. Why not do what the House is supposed to do?”

Cantor stood by the decoupling of the Farm Bill from food stamps funding. “A Republican majority for the first time says, ‘We don’t like the way things have always been done in Washington,'” he said. “That’s exactly what we’re trying to change.”

Cantor also pointed out that the House was attempting to fix longer-range fiscal problems rather than simply fund government programs on the short term. “What we need to have happen is leadership on the part of this president and the White House, to come to the table finally and say we’re going to fix the underlying problems that’s driving our deficit,” he said. “We know that is the entitlement programs and the unfunded liability they’ve leaving on this generation and the next.”

“Aren’t we heading for a train wreck?” Wallace asked, in reference to the coming fight over the debt ceiling.

“I hope not,” Cantor replied. “We are earnest in our desire to fix these problems, and we believe there is common ground.”