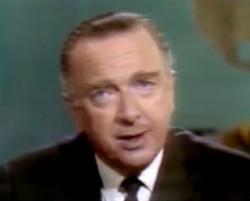 Walter Cronkite – known in his time as “The Most Trusted Man In America” and “Uncle Walter” who shared the news with America in their living rooms each night – is dead at 92, after a long life and one of the great careers in televison news. In his 19 years helming the CBS Evening News – from 1962 to 1981 – he reported some of the most important moments of his time – and of television’s early history.

Here are a few of those moments:

Cronkite signing off after JFK’s funeral, on November 25, 1963: “Today is a day that will live in memory, and in grief.” Cronkite narrates over a photo montage – particularly striking is the shot of people all reading the news, together, from the newspaper, on a train:

Cronkite’s famous editorial against the Vietnam war, February 27, 1968, which is credited with turning the tide of public opnion against the war:  “It seems now more certain than ever that the bloody experience of Vietnam is to end in a stalemate.” Cronkite had traveled to Vietnam earlier that year, and after the night’s report about the Tet Offensive, he made a rare editorial pronouncement, declaring his lack of faith in the war – and in its leadership. President Lyndon Johnson’s famous reaction: “”That’s it. If I’ve lost Cronkite, I’ve lost middle America.” Embedding on the video is disabled (watch it here), so here is an excerpt from his closing comment:

“We have been too often disappointed by the optimism of the American leaders, both in Vietnam and Washington, to have faith any longer in the silver linings they find in the darkest clouds….For it seems now more certain than ever that the bloody experience of Vietnam is to end in a stalemate. This summer’s almost certain standoff will either end in real give-and-take negotiations or terrible escalation; and for every means we have to escalate, the enemy can match us, and that applies to invasion of the North, the use of nuclear weapons, or the mere commitment of one hundred, or two hundred, or three hundred thousand more American troops to the battle. And with each escalation, the world comes closer to the brink of cosmic disaster.”

Cronkite reporting the assassination of Martin Luther King, April 4, 1968: During his report, Cronkite referred to him  as “the apostle of non-violence” “the Nobel Peace Prize winner,’ and, in a sign of the times, “the 39-year-old Negro leader.”

Cronkite reporting on the Three Mile Island nuclear disaster on March 30, 1979: “The world has never known a day quite like today – it faced the considerable uncertainties and dangers of the worst nuclear power plant accident of the atomic age. And he horror tonight is that it could get much worse.” It is an incredibly detailed broadcast.

Cronkite’s first newscast, on September 2, 1963, which also kicked off nightly news as we now know it: “Good evening from our CBS newsroom in New York, on this, the first broadcast of network television’s first daily half-hour news program.” The opening story was the battle over desegregation in Alabama.

Cronkite on the genesis of his signoff, “And that’s the way it is”: This is wonderful. In an interview with the Archive of American Television in 1998, Cronkite told the story of how he searched for a good signoff that would segue from the final story of the half-hour. He didn’t tell CBS News president  Dick Salant, who heard “and that’s the way it is” on the broadcast along with everyone else – and hated it.