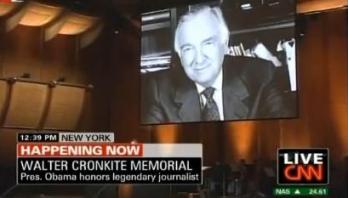 The Walter Cronkite memorial this morning was a moving, wide-ranging event which saw speakers like Pres. Barack Obama and Katie Couric.

There were so many speeches, with so much information and stories in each, that it’s tough to narrow it down to just a few choice quotes. But here’s a glance at 10 of the key moments from the memorial today (in the order they were said):

• “The Cronkite tradition is alive and well at CBS News.”
Sean McManus, after saying Walter Cronkite IV is an intern in CBS News’ D.C. bureau.

• “At the time, I could have done with a picture with Walter Cronkite.”
Former Pres. Bill Clinton, who said Cronkite asked Clinton and his family to join him on a boat ride in Martha’s Vineyard during the summer of 1998.

• “They just stood up, because that’s what you do when a gentleman is leaving the room.”
Nick Clooney, describing his last dinner with Cronkite in March. When Cronkite left the restaurant, the other patrons stood up. The conclusion to a very touching speech.

• “Who is this? It’s Walter Cronkite, for God’s sakes! How quickly they forget.”
Tom Brokaw, relaying what Cronkite said to him after he answered the phone with a “Who is this?” following an interview Brokaw conducted with Mikhail Gorbachev.

• “With respect to my late husband, Jay, I was never as excited to go out on a date than I was that night.”
Katie Couric, describing her first meeting with Cronkite in the summer of 2006.

• “One of the best parts about giving an award to Walter was he always liked it. He was genuinely appreciative.”
Andy Rooney, talking about Cronkite’s penchant for receiving – and enjoying receiving – various awards. This was one of the many highlights of Rooney’s taped message.

• “Linda, I think we should make those changes, and not because it’s a women’s lib thing.”
CBS VP Linda Mason, on what Cronkite told her after she suggested some changes to his report. Mason was the first producer at the CBS Evning News.

• “Couldn’t you tell them to come over here? I’m trying to get a drink and I don’t want to lose my place in line.”
Bob Schieffer, describing a situation at a book party when he tried to pull Cronkite over for a picture with Brokaw, Peter Jennings and Dan Rather – the evening news anchors at the time.

• “Hello Mr. President, are you going to take your flu shot?”
More from Schieffer. This story, about the fierce competition with Barbara Walters, referred to a “get” by Walters, who interviewed Pres. Ford in an exclusive for the Today show. But Cronkite got a chance to say hi to the President, and used the opportunity to get his own exclusive, which aired ahead of Walters’.

• Here’s Pres. Obama’s comments about Cronkite and the media in general: