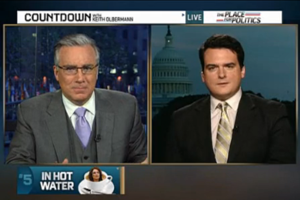 Sarah Palin received her first dose of Facebook backlash earlier this week when she endorsed Republican Senate Candidate Carly Fiorina over Tea Party favorite Chuck DeVore, with reports coming in that more than half of the comments on her post supporting Fiorina were negative and called Fiorina a “conservative in name only.” Yes, Keith Olbermann did use this as an excuse to play “Demon Sheep” again, and had Washington Post blogger David Weigel on the show to explain Palin’s thinking: “Fiorina is one of the only women in politics who gets made fun of as often as Palin does.”

“I dont think the Palin people understood how bad this would hit with the base,” Weigel told Olbermann in response to Olbermann asking why this happened in the first place. Palin had already received some criticism for her endorsement of John McCain, although because of her candidacy with him in 2008 most of that criticism was muted. This time, however, many Tea Party members, who took to DeVore early on in the race, are confused as to why Palin would not endorse him. Weigel argues that, while the endorsement “doesn’t make a lot of sense” ideologically, both Palin and Fiorina have been in hot water for inconsistencies between their ideologies and their rhetoric, and as such have a natural affinity:

“Palin has been criticized again and again for appearing at Tea Parties and not giving them a lot more than the usual rhetoric. They love it– at every Tea Party her rhetoric gets a standing ovation. But this is the first we’ve seen of tea partiers saying “wait a minute, you just asked us to support a Republican whose values we don’t really understand, and if we do understand them correctly, we don’t agree with. What’s going on here?”