Warren Buffett On Class Warfare: ‘If This Is A War, My Side Has The Nuclear Bomb’
video

Warren Buffett On Class Warfare: ‘If This Is A War, My Side Has The Nuclear Bomb’ 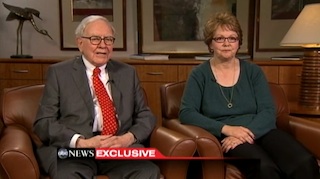 Warren Buffett is back in the news after President Obama’s State of the Union Address and, yesterday, he and his secretary (arguably this election’s Joe the Plumber except she actually “plumbs”), Debbie Bosanek, sat down with ABC News’ Bianna Golodryga to discuss the speech. Buffett was rankled by conservative implications that the President’s attempts to follow the “Buffett Rule” and raise taxes for the extremely wealthy to meet the rest of the nation was “class warfare.” He pointed out that, were it a war, it was pretty unfair since his side, the ultra rich, has the “nuclear bomb.”

“The interesting thing is that the tax code, I wouldn’t call it a war, but it is a struggle. Groups try to keep their own taxes down. People lobby to keep their estate taxes down. They lobby to keep their capital gains taxes down. So, if this is a war – I wouldn’t call it a war, I’d call it a struggle – but, if this is a war, my side has had the nuclear bomb. We’ve got K-Street, we’ve got lobbyists, we’ve got money on our side in terms of lobbyists. Deb does not have a lobbyist. She doesn’t have anybody remotely that’s representing her. But, believe me, plenty of rich families have lobbyists that are working like crazy to get rid of estate taxes, lower capital gain taxes, whatever it may be. So, if there has been a war going on, the war has been waged by the people who are very well to do who are trying to shift the burden onto people like that and away from themselves.”

To quote Jon Stewart’s great line from the other night, it all boils down to the fact that poor people just have really sh*tty lobbyists.

A lot of the interview had to do with Bosanek herself. She talked about how exciting it was to go to the State of the Union, how she was initially terrified to become a public figure in this election, but how she is able “to represent the average citizen who needs a voice.” She and Golodryga joked about how Buffett forgot to warn her that he was going to mention her in his now infamous column that started this all despite their open relationship.

Um…Golodryga? Just a tip; thanks to a certain presidential candidate, the term “open relationship” means something else now. Maybe a different choice of words is in order.

Most of the talk, however, came from Buffett himself. When asked why he thought the American public hadn’t really focussed on the idea until they had a clear representation in himself and Bosanek, Buffet theorized that it was because they just hadn’t been well enough informed of the discrepancies. He pointed out that much is written and said about the 50% who supposedly don’t pay “any taxes,” but that no one ever explains that it’s actually just payroll taxes that they’re referring to. Besides, even if the unemployed and underemployed aren’t paying much payroll taxes (because they can’t), loopholes have made it so that those on the other end of the economic spectrum barely are too.

Buffett was also asked about Mitt Romney’s recent issues with releasing his tax returns. Buffett said he wasn’t surprised with the candidate’s reluctance since it obviously doesn’t look good for an incredibly rich man to be paying rates half as high as those who make in a year what he makes in a day. But, Buffett said he didn’t “blame” Romney for paying at those rates. He blamed Congress for enacting the laws that enabled him to. He also said that the rates Romney paid in no way disqualified him from being president, since he was following the law. It was the law that needed to be changed and Buffett said he’d like to ask Romney if he’d be willing to change the rules once he had the power to do so.

Watch a the full interview below, courtesy of ABC: