Was Bill Clinton’s ‘Gridlock’ Line in MLK Anniversary Speech a Dig at Obama? 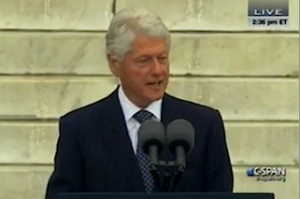 Former President Bill Clinton’s remarks at the event marking the 50th anniversary of the March on Washington today were mostly what you would expect from President Obama’s Democratic predecessor. He described how Dr. Martin Luther King, Jr.’s “I Have a Dream” speech “changed America” and “moved millions, including a 17-year-old boy watching alone in his home in Arkansas.” He extolled civil rights leaders for persevering in the face of violence, including Dr. King’s ultimate assassination.

But one line stood out for being what appears to be a dig at President Obama’s leadership style in the face of a Congress that’s less-than-willing to work with him to tackle the major problems facing America. “I would respectfully suggest that Martin Luther King did not live and die to hear his heirs whine about political gridlock,” Clinton said, without exempting President Obama from that criticism.

In the same section of his speech, Clinton said political gridlock was “nothing new” in Washington. “It is time to stop complaining and put our shoulders against the stubborn gates holding the American people back,” he told the crowd to loud applause. Later, he did “thank” the president for his efforts in making education more accessible and health care more affordable, but none-the-less the earlier comments must have stung for Obama.

It’s hard to hear Clinton’s comments and not think of President Obama’s most recent national television interview with CNN’s Chris Cuomo. In that interview, Obama lamented the fact that Republicans in Congress may agree with him privately but are stopped from working with him by political forces outside the president’s control. “I’ve made this argument to my Republican friends privately,” Obama told Cuomo, “and, by the way, sometimes they say to me privately, ‘I agree with you, but I’m worried about a primary from, you know, somebody in the tea party back in my district’ or, ‘I’m worried about what Rush Limbaugh is going to say about me on radio.’”

Was it comments like this from Obama that spurred Clinton to work this particular piece of criticism into his speech on such a historic, momentous day for all Americans, not just the first African-American president? Perhaps it was Clinton’s way of telling Obama, when you feel like blaming others for “political gridlock,” ask yourself, “What would MLK do?” and put in to the work to push past those barriers that have existed for ages and show no signs of abating.