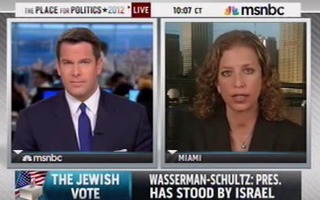 Ahead of Israeli Prime Minister Benjamin Netanyahu’s address to the United Nations on Thursday, Democratic National Committee Chair Rep. Debbie Wasserman Schultz (D-FL) appeared on MSNBC to tout the strength of the bilateral relationship between Israeli and the United Sates. She said that, contrary to assertion by members of the GOP, President Barack Obama and Netanyahu are “close” and Israeli leaders across the political spectrum have said repeatedly that “Israel has no greater friend than President Obama.”

MSNBC anchor Thomas Roberts cited a report in the New York Times which previews a push by the Republican party for the Jewish vote in Florida. “Would the angst, Congresswoman, of Jewish voters on the question of Iran put the Jewish vote into play,” asked Roberts.

“If you look at the Gallup poll of Jewish voters, President Obama is actually at about 70 percent in the question of which candidate Jewish voters are likely to vote for,” Wasserman Schultz replied. “That’s ahead of where he was at the same point in the election in 2008.”

“They’re not always going to agree on everything, but I think the record is very clear and there are Israeli leaders across the political spectrum in Israel who have consistently said that Israel has no greater friend than President Obama,” Wasserman Schultz concluded.