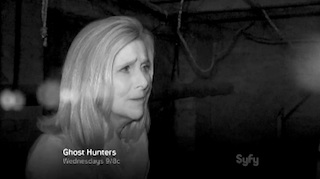 I’m going to be honest, I just don’t get the appeal of Ghost Hunters. Don’t get me wrong, I find ghost hunting itself fascinating. But, as a TV show? I just don’t get it. The show has been on TV for seven damn years and, presumably, every episode’s basically identical. There’s never going to be an episode where a ghost just walks into the frame and says “Boo.” And, if these guys actually did get real proof of some kind of paranormal event, it would be all over the news months before it ever got on the SyFy Channel. Maybe I’ve just been spoiled by movies but, until one of these guys walks into the bathroom and rips his own face off, the whole endeavor seems rather dull.

You know what I do get the appeal of, though? Seeing likable TV personalities wander around dark basements! Now, that makes sense to me as a television premise. So that’s why I’m all about these preview clips of Meredith Vieira guesting on the show and joining the team on a hunt.

Vieira’s going to be appearing on the show this week and the sneak preview shows her joining regular hunters Jason Hawes and Grant Wilson down into the basement of some house where a kid was apparently held captive.

Vieira’s always been one of our favorite TV personalities and she seems to handle the excursion with aplomb. However, she’d go up a few notches to being one of our favorite human beings if the full episode features her sneaking up behind one of the guys and yelling “Boo!” loudly.

Seriously, I’d rather see that than any actual ghost footage.

Watch the clip from SyFy below: