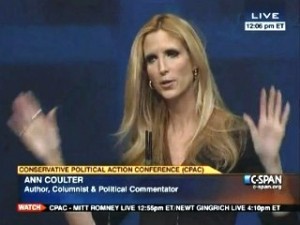 Columnist-cum-Presidential roaster Ann Coulter took to the CPAC stage Friday, where she spoke at length about President Barack Obama.

She compared the media’s positive take on unemployment numbers under President Obama to having someone expect you to praise a doctor who treated you for a fever of 102, brought your fever up to 104, and then — over three years — brought it down to 103. (That’s a sneak peek at the future of health care under Obama, she joked, adding that she was only kidding. Under Obama’s plan, you’d have to wait three years to even see a doctor.)

Coulter conceded that Obama would be hard to beat because 1) he’s an incumbent, 2) Americans keeping telling polls they wouldn’t mind sharing one milkshake, two straws with him, 3) he’s our first black president, and 4) the NFM (Non-Fox Media) is “gaga about him.”

“He’d probably make a lovely next-door neighbor,” she added. “As long as you’re not Chinese. Then he’d be constantly borrowing stuff.”

But hey, she said, politically correct Americans love the idea of having elected our first black President, “even if we did get Flavor Flav instead of Thomas Sowell.” After a few scattered laughs and cries “whoa” from the audience, Coulter then asked when it would be ok to “admit we elected a man based on the color of his skin… I’m talking, of course, about John Boehner.”

Coulter then compared New Jersey governor Chris Christie to none other than Ronald Reagan. But, alas, Christie won’t run. And, apparently, “won’t even return my calls.” She then praised Mitt Romney‘s evolution as a speaker and debater over the past four years.

But back to Obama: “No amount of that Jakarta charm,” she said, referring to the years Obama spent living in Indonesia as a child, “is going to get people their jobs back.” And now is a critical time, she continued, because it’s the last chance we have to repeal “ObamaCare:”

If it is not repealed in the next administration, that’s it. It is here to stay. People start receiving their treats, Newt Gingrich will be denouncing plans to reform it as “right-wing social engineering,” and American begins its inexorable decline into Western Europe without the charming cafés and cobblestone streets.

The way the Right can beat Obama, she continued (despite her earlier “Jakarta” comment, I guess), is not to attack Obama as a person by calling him an “Kenyan colonialist” and the like, but to go after his policies, as Reagan did with Carter. Meanwhile, she continued, the Left will try to take down the GOP field they only way it knows how — by calling the candidates stupid or crazy. But that won’t work with Romney. The most you can say about Romney is that he’s square. But, she added, “I think we’ve had enough of hip. Hip has nearly wrecked the country. Let’s try square for a while.”

When asked by an audience member about criticism hurled at female conservatives, Coulter said that — as her bodyguard can attest — “all pretty girls are right-wingers.”

Have a listen, via C-SPAN: