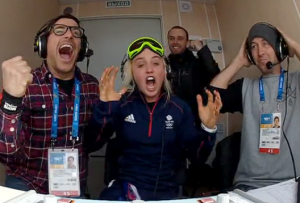 There is a certain level of pride you have in your home town or home state or home country when they’re in a major athletic competition, but if you’re doing TV commentary on it, you might want to curb your enthusiasm just a tad. But this past Sunday, BBC commentators watching the Olympic snowboarding event just couldn’t contain themselves at the prospect UK snowboarder Jenny Jones would take home the gold. From the time Jones made her way down the slope to the moment , Ed Leigh, Tim Warwood, and snowboarder Aimee Fuller were as excited and hyperactive as humanly possible, shouting with delight as each new snowboarder’s score came in.

And when one of Jones’ competitors screwed up on the slope, they went completely bonkers and were just cheering so hard, because it meant Jones placed third and would walk away with the bronze medal. So hooray for schadenfreude!

Now, as you can imagine, not everyone thought this was necessarily professional, and the BBC received a lot of complaints about it, so they had to issue a public apology.

Viewers complained that the BBC commentary team called the wrong medal, saying Jones had won gold… Some viewers said the commentators were “puerile and hyperactive”…

The BBC said on Monday that Jones’s medal, the UK’s first for a Winter Olympics snow event, was a “truly historic occasion” and its commentators were “understandably very excited”. But it added that “on occasion this excitement got the better of them and this is something we will work on for future events”.

You can watch the hilarious mania as it unfolded below, via BBC 2: