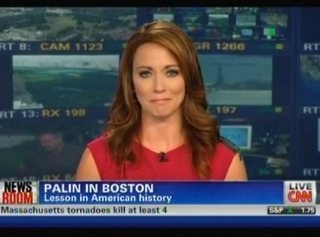 Sarah Palin is in Boston today, meeting with supporters and other curious elements. She is also chatting about how meaningful being in such a historic region is to her on her One Nation tour. Of course, this means Sarah Palin is talking about history, and CNN anchor Brooke Baldwin, who was covering the story this afternoon, could barely contain her contempt as Palin described Paul Revere “sending those warning shots and bells” to tell Americans that “the British weren’t taking away our arms.”

Palin strung together an off-the-cuff explanation of the famed Midnight Ride for those listening that seemed to involve a ton of noise, bells, gunfire, and a warning that the British were out to take away Americans’ as-yet-nonexistent Second Amendment rights, which Baldwin couldn’t help but react to with deer-in-the-headlights confusion. “History lesson from Sarah Palin on the Midnight Ride of Paul Revere,” she deadpanned.

Palin’s version wasn’t exactly the official History Channel rendition of the tale, and she delivered it in a somewhat stumbling fashion, but the thing about the Midnight Ride is that it is precisely the sort of historic event where everyone seems to have it wrong. For one, Revere didn’t warn the British were out to take anyone’s arms, as he didn’t yell out “the British are coming!”, as the myth goes. He had to be quiet to not let the British know that he knew (sorry, but no bells either) they were coming– to seize weapons stores, actually– and history notes that his warning was likely something far less epic-sounding, like “the Regulars are coming.”

Either way, Palin’s tour continues to perplex and her words to confuse the media as she heads well on her way to wherever her tour will take her. The report via CNN below: