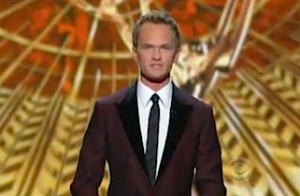 Neil Patrick Harris must have decided there was no way to top his epic musical number that opened the Tony Awards back in June. So instead, the host opened the 65th annual Primetime Emmy Awards with a pre-taped montage that was a true tribute to television in all its glory.

Harris began by “binge-watching” the entire year’s worth of television to catch up for his very important hosting duties. Naturally, that much TV started making the host delusional as all his favorite characters began talking back to him from the screens.

One Harris took the stage, he began lightly roasting the stars sitting in the first few rows of the Nokia Theater in Los Angeles as well as the year’s biggest shows, like Orange is the New Black. “Or as Paula Deen has to call it, ‘Orange is the New African American,'” Harris joked. “Not soon enough?”

Soon enough, last year’s host Jimmy Kimmel began heckling Harris from the audience before joining him on stage to offer some important advice. More previous hosts, Jane Lynch, Jimmy Fallon and Conan O’Brien followed close behind to tell him everything he was doing wrong. For good measure, House of Cards’ Kevin Spacey did his best Frank Underwood with a monologue direct to camera.

But, best of all, Golden Globe hosts Tina Fey and Amy Poehler began demanding Harris start “twerking” it from the front row before taking the stage to present the first award of the night.