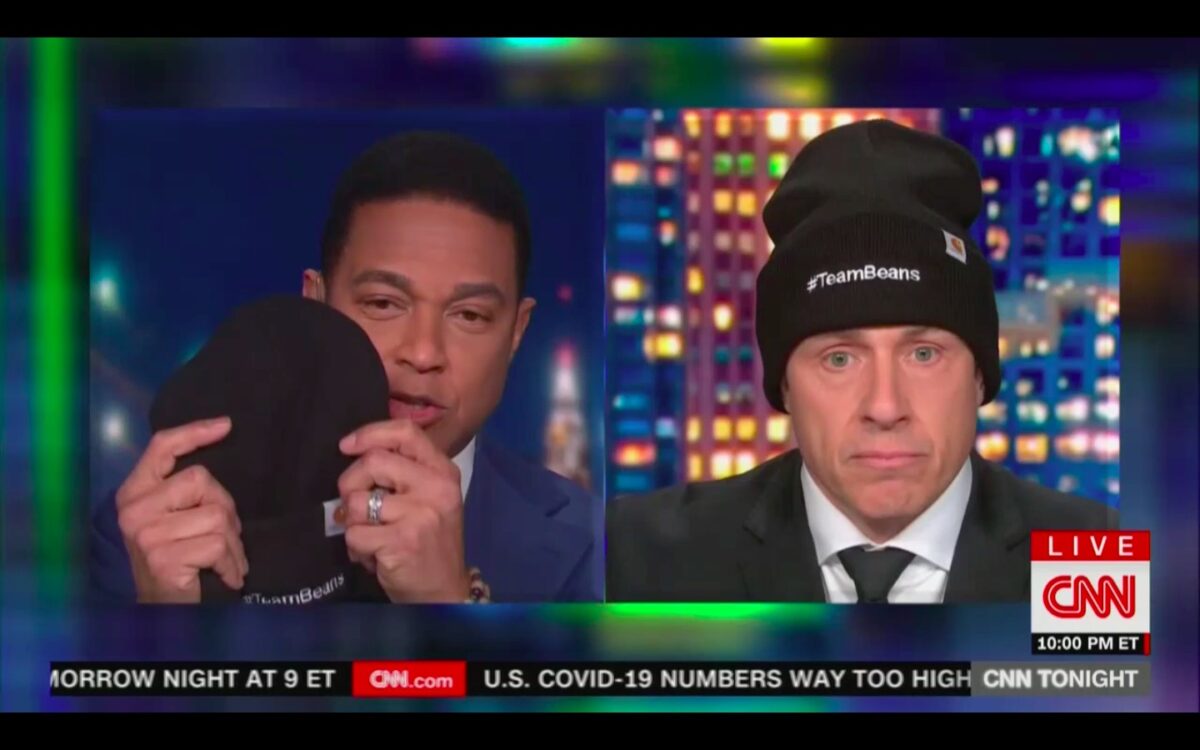 CNN’s Chris Cuomo and Don Lemon often banter — and bicker — during the transition between their two shows at 10 p.m., but Thursday night’s handoff of the television baton had a special message to support pediatric cancer research, in honor of the daughter of one of their network colleagues.

Fly high Francesca. I hope wherever you are today you’re surrounded by Elmo balloons. pic.twitter.com/LljvSogLSU

Thursday would have been Beans’ first birthday and CNN launched a fundraiser at TeamBeans.shop, selling black Carhartt beanie hats with #TeamBeans embroidered on them. The money raised will go to pediatric cancer research at the Dana-Farber Cancer Institute.

Cuomo wrapped his Thursday show calling it “a tough night,” as it was both the one-year anniversary of Covid-19 being declared a pandemic, and was also Beans’ birthday.

“There’s something else today should have been,” said Cuomo. “Today would also have been the first birthday for a very special little girl to us: Francesca Kaczynski, known forever as Beans. That’s what they called her. The daughter of our good friend and colleague, Andrew, the brain behind the K-File, investigative genius. His wife, Rachel Ensign. Beans smiled bravely in the face of another health monster, a rare form of brain cancer. She fought. They fought. They moved. They did everything. They believed. They loved. Inspired all of us.”

“I want you to be on Team Beans,” Cuomo continued, holding up the #TeamBeans hat, explaining that he was going to auction off the hat on Twitter to the highest bidder, and encouraging viewers to buy their own on the CNN website. “If we can raise money and help another family, what a beautiful thing. Teambeans.shop. I’ll tweet out the link. If you want this hat, make me an offer.”

Lemon then joined Cuomo in urging their audience to support the fundraiser, and said that he had worn his hat earlier in the day, plus a face mask that honored the memory of Scott Beigel, a teacher who had died in the mass shooting at Marjory Stoneman Douglas High School.

“We can make a difference,” Cuomo added. “Andrew and his wife — special people who fought a hell of a fight and really did it in an inspirational way…I’ve never seen people come together around their kid any better than they did and made all of us love them and Beans.”

Numerous CNN Twitter accounts posted their support for the #TeamBeans fundraiser as well.

Wow! Nearly 3300 #TeamBeans beanies sold already. Thank you from the bottom of our hearts for your kindness and generosity. For more info & to purchase a beanie in memory of Francesca “Beans” Kaczynski visit https://t.co/XMNYgV554B. Proceeds benefit research at @DanaFarber. ?❤️ pic.twitter.com/1PiRrJmSzS

A message about #TeamBeans, in remembrance of Francesca “Beans” Kaczynski, who should’ve been smashing into a cupcake today to celebrate her first birthday with her mom and dad, Rachel and Andrew. https://t.co/Qe4s8hizZS to make sure all the littles get a chance at that cupcake. pic.twitter.com/fJRbCwe6ZL

Tonight, we remember Francesca “Beans” Kaczynski, daughter of our dear colleague, who would have turned one today. She died on Christmas Eve from brain cancer.

In the @cnnsitroom we remembered Francesca “Beans” Kaczynski who would have turned one today but died on Christmas Eve from brain cancer. @cnn is launching a fundraiser in her memory. All proceeds from sales of the #TeamBeans hat will benefit @danafarber Cancer Institute. Watch: pic.twitter.com/hurUZEN97K

I want to thank all my CNN colleagues for making a horrible day a little bit better and helping us raise so much money for pediatric cancer research. https://t.co/sKtqgryM6C

Watch the video clips above, via CNN.