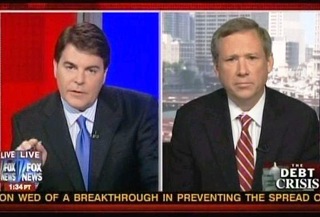 Sen. Mark Kirk (R-IL) appeared on Fox News this evening to support the “Simpson-Bowles” plan, one of the many Congressional offerings for how not to default on our national debt. As a Republican, however, supporting the plan requires jumping over a particularly problematic hurdle– it calls for “revenue increases.” In a tense discussion, Fox’s Gregg Jarrett did his best to make Sen. Kirk admit he was calling for a tax increase, getting increasingly frustrated as Sen. Kirk denied the fact.

Sen. Kirk wholeheartedly embraced the plan, which calls for a reduction of $2.5 trillion in spending and “tremendously reduces future borrowing.” That, however, was not the part with which Jarrett had a problem– it also required Republicans to concede a tax increase. “You’re advocating essentially a tax increase, aren’t you?” Jarrett asked. Sen. Kirk replied that the plan included entitlement reform and spending cuts, which… didn’t answer the question.

“The tax reform in Simpson-Bowles is right,” Sen. Kirk responded, adding something about the Founding Fathers.

More of the same.

“I’m confused, I must confess,” a frustrated Jarrett replied. He finally got Sen. Kirk to admit that certain concessions had to be made, to which Jarrett followed up asking whether he felt he “betrayed people who had confidence in you that you were not going to raise taxes.” “No, he replied, “because my job is to expand the economy.” Jarrett seeing the wound, kept punching at it, telling Sen. Kirk he was “losing the American people” and that, while he wanted to do the right thing, “the right thing is often reflected in what America thinks.” However, Jarrett, bizarrely followed up that remark with a poll that showed a plurality of Americans would blame the Republican Party if a compromise is not reached– supporting Simpson-Bowles (and tax increases) made Kirk one of the few Republicans attempting a compromise. The second poll Jarrett displayed was much more on topic, showing Americans much preferred spending cuts to tax increases.

The debate is particularly poignant because it touches upon a reality of this tax debate that seems to elude both the hard left and the hard right: a deal that will work will require compromise, and compromise will require both tax increases and entitlement cuts, because America is very much broke. Now if only anyone in Congress could say this aloud without forcing journalists like Jarrett to ask the same blunt questions over and over again, the United States may even not default on its debt!