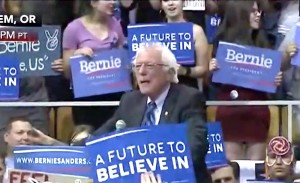 You’ve really got to love live television sometimes. In a moment that will surely help Bernie Sanders more than it will hurt him, Fox News’ Sean Hannity had a moment of panic during Tuesday night’s West Virginia primary coverage when he tossed to Bernie’s victory speech, only to be greeted by an already-riffing Geraldo Rivera trashing the night’s victor. As you can plainly hear, Rivera doesn’t seem to care all that much when Hannity warns him his mic is on. That’s a funny part, but not the funny part:

Rivera: Annoying. This guy is so annoying.

Hannity: Your mike is hot!

Rivera: He’s so annoying. People who think that his supporters are going to go to Donald Trump are smoking dope.

what do you mean?

Catching Geraldo is mildly amusing, although unlikely to sway a single voter, except maybe in Bernie’s favor, but what’s really funny here is that immediately before and after Hannity freaked out because people might hear a legitimate, if candid, opinion, both he and Bolling mangled objective facts. First of all, Bernie is a “Democratic Socialist,” not a Marxist, and the idea that he wants a tax rate of 98% (usually quoted by conservatives as 90%) is also a lie. Sanders actually joked that he would definitely not go as high as 90% because “I’m not that much of a socialist compared to Eisenhower.”

Seconds later, Bolling misstates the results of the West Virginia exit polls, which showed that 44% of Bernie Sanders supporters say they will vote for Donald Trump over Bernie Sanders in November.