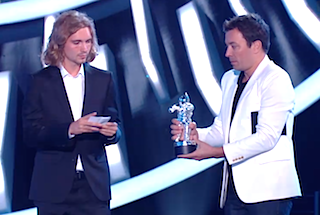 With a wardrobe malfunction from Nicki Minaj and a career-defining 16-minute powerhouse performance from Beyoncé, Miley Cyrus likely knew there was nothing she could on stage at last night’s 2014 MTV Video Music Awards that could top last year’s tweaking debacle. So instead, she decided to let a 22-year-old homeless man named Jesse accept her Video of the Year award for “Wrecking Ball.”

When Jimmy Fallon called her name towards the end of the ceremony Sunday night, Cyrus stood up and appeared to be walking towards the stage with the man, but then let him continue while she stayed behind.

The pop star fought back tears as Jesse read from a prepared speech: “I am accepting this award on behalf of the 1.6 million runaways and homeless youth in the United States who are starving and lost and scared for their lives. I know, because I am one of those people.”

The faces of Katy Perry and Sam Smith seated over Cyrus’s right shoulder during Jesse’s speech said it all: 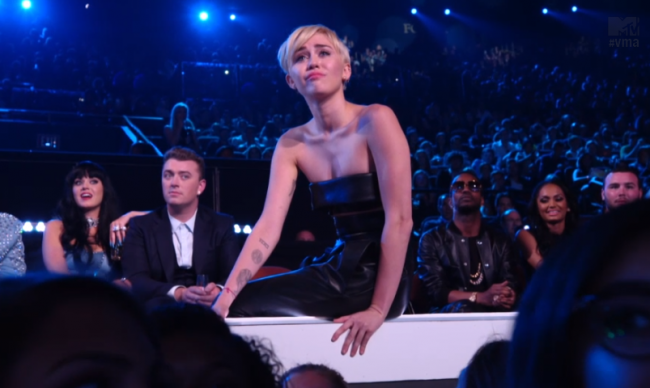 The moment recalled the acceptance speech a Native American woman named Sacheen Littlefeather gave on Marlon Brando’s behalf when he won the 1973 Best Actor Oscar for The Godfather. Through a spokesperson, Cyrus told The New York Times that she was inspired by Brando to cede her stage time to the cause of teenage runaways and homelessness.

Jesse directed viewers at home to go to Cyrus’ Facebook page, where she had posted the video below explaining the cause and asking people to donate a minimum of $5 at at prizeo.com to get a chance to win a “VIP concert experience” with her in Rio:

The whole thing was a stunt that stood in sharp contrast to her performance from last year, which drew the ire of Mika Brzezinski, Rush Limbaugh and seemingly everyone in between.