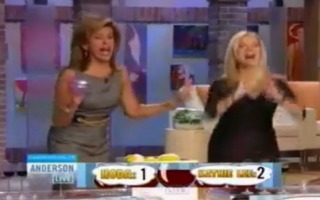 On a sleepy Boxing Day, many of the nation’s newsmakers are still on holiday and those of us at Mediaite enjoy the rare opportunity to peruse the standard fare which graces daytime broadcast television. Not that we often take the opportunity, but today I stumbled across a tip that I just could not ignore. I determined that it would be a dereliction of my responsibility to not bring this episode to your attention as well, dear reader.

Allow me to review my journey into the daytime TV abyss this morning.

While sifting through the barren post-holiday television landscape for content, I stumbled across this tweet by POLITICO reporter Glenn Thrush:

Haplessly intrigued, I embarked on a quest to find said clip of Kathie Lee Gifford and her Sancho Panza, Hoda Kotb, to determine for myself just how morning-wasted they were. What I found exceeded every expectation I had for what daytime television can and should be.

Joining Anderson Cooper on Fox’s Anderson Live, the eponymous host and his guest hosts spent the morning sipping on vampire-themed wine with a co-star of the final episode of the Twilight series. After a few healthy sips of the vino, the group went into a break.

When they returned, Kathie Lee and Hoda played another wine-theme game – at least, it appeared to be a game. What I witnessed was an indecipherable series of muscle spasms that an expert may identify as intentional, but my amateur eye shrugged off as involuntary. In this game, Kathie Lee and Hoda continually throw balls at oversized wine glasses without rhyme or reason amid efforts to identify a variety of shirtless male celebrity from their pictures. Along the way, they drink wine, seemingly, whenever they feel like it.

It was a chaotic exercise. My reaction resembled what I imagine a time traveler would experience watching a group of Inca tribesmen frantically whipping balls into hoops and at one another with a logic and consistency known only to them. Head cocked to a perfect 45 degree angle, I watched the escapade – captivated – but unsure whether this was post-worthy.

I came to the conclusion that it was, not because this segment is unusual or noteworthy, but because it is, in all likelihood, a common and regular sight for daytime television. There is no better window into American culture.

This segment merits the focus of esteemed anthropologists. NASA should look into loading this segment on an Ares 1 so it can be fired into interstellar space on an errant probe to serve as Earth’s singular ambassador to the universe – this drunken game exemplifies what human culture can be at its best. No single television award enjoys the stature or high repute required to bestow the proper recognition this brilliant and glorious moment in entertainment deserves.

So, what is, in my opinion, the clearest takeaway from this deeply edifying Wednesday morning? That Glenn Thrush’s television viewing habits are deserving of renewed appreciation.