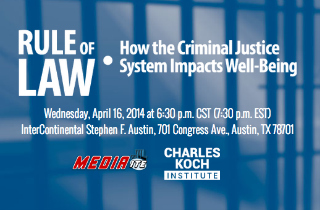 Mediaite hosted its second major panel discussion Wednesday night. Sponsored by the Charles Koch Institute, Rule of Law: How the Criminal Justice System Impacts Well-Being, was held at the InterContinental in Austin, Texas.

You can watch the full video of the event here:

Here’s an overview of the event and topics covered: