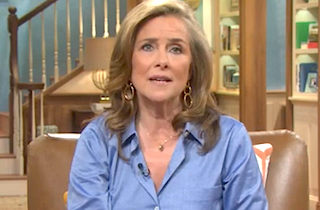 Inspired by the #WhyIStayed Twitter hashtag campaign that cropped up following the domestic violence charges against the Baltimore Ravens’ Ray Rice, Meredith Vieira decided to use her new daytime talk show platform Wednesday to reveal her own story about the abuse she suffered in a relationship many years earlier.

“I was in an abusive relationship many, many years ago as a young woman,” Vieira told her audience on Wednesday. “I want to explain to you why I stayed.”

“It started out, I loved this guy,” she explained. “It started out, we’d have a fight and he’d just sort of grab my arm. I didn’t think a lot about it, and then it turned into pushing me into a wall and then it went beyond that, to [his] actually taking his hand and grabbing my face and saying, ‘I could ruin your career if I wanted to and no one would watch you.'”

“I’m a smart woman,” Vieira continued, saying that people would ask, “‘Well, who would stay in that situation?’ Somebody who doesn’t have the wherewithal to get out, the means to get out. I had that. I had a job at the time, and I kept in this relationship.”

“I’ve done a lot of thinking about why, and I think part of it was fear,” she said. “I was scared of him. I was scared if I tried to leave something worse could happen to me.” When the man would come crying and apologizing to her afterwards, she would even “feel like maybe I contributed somehow to this.”

After describing the horrific violence she faced, Vieira shared this message with viewers: “If you are going through this, get yourself to a shelter, by all means tell somebody what’s going on, let somebody know. That’s just my experience with it, and I know it’s rampant in this country, and we all have to accept the fact that it’s not just an issue with the NFL — it’s an issue with all of our lives, and until we take it seriously, more and more women are going to get abused.”

Watch video below, via The Meredith Vieira Show: