WATCH: Nobody at Fox Has Actually Read Gates’ Memoir but They Sure Have Opinions on It
READ THE BOOK

WATCH: Nobody at Fox Has Actually Read Gates’ Memoir but They Sure Have Opinions on It 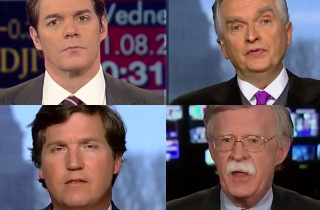 On Wednesday morning, Fox News ran eight — count ’em — eight segments on former Defense Secretary Robert Gates’ forthcoming memoir, in which he scalds President Barack Obama for frivolously deploying troops in Afghanistan under a military strategy he didn’t support. Or at least that’s the impression you’d get from the pundits who pontificated on the book. The problem—none of them have actually read it.

Duty: Memoirs of a Secretary at War doesn’t come out until January 14, and all Fox News’ anchors and guests relied on very selective excerpts from Bob Woodward’s Washington Post review. (Cherry-picked excerpts at that—most segments snuck in the maybe-relevant part about how Gates actually agreed with Obama’s decisions on Afghanistan for the few seconds before a commercial break.)

It’s absolutely possible those few lines from a 594-page book are an accurate condensation of Gates’ complaints, though it’s certainly suspicious that they dovetail with a view Woodward has taken of the Obama administration in the past. (Whither #leadership?) To know, we’ll all have to read the book. Or not:

“I think the real insights that Gates provides is that President Obama simply is not concerned with American national security,” said former U.N. Ambassador John Bolton, who added that he hadn’t read the book.

“If our president tripled down in Afghanistan and never believed in the mission, never believed it could work, but for the last five years has allowed our soldiers and Marines and Navy corpsmen to be killed or maimed in a war the president doesn’t believe makes sense or that he doesn’t believe he can win? That is as low as any president in our history has gone,” said Fox’s strategic analyst Ralph Peters, who added that he was excited to read this book when it came out, unlike most D.C. titles, which are “trash.”

The pundits were working with so little they even tripped over themselves and ended up criticizing Gates. “It seems to me if you really feel this way you have an obligation to do something about it,” Tucker Carlson said of Gates’ objections. “Maybe he did. I haven’t read the book.”

Watch a montage below, via Fox News: