Watch: Obama On GM: ‘The American Auto Industry … Is Once Again On The Rise’ 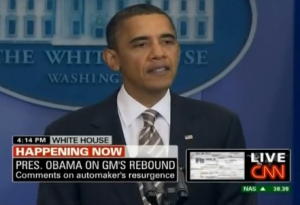 This afternoon, President Obama spoke before the press about GM’s new public stock offering. His brief, optimistic speech noted that the American auto industry has begun to bounce back after nearly going bankrupt—”For the first time in six years, Ford, GM, and Chrysler are all operating at a profit. In fact, last week, GM announced its best quarter in over 11 years,” he said.

Here’s a transcript of Obama’s remarks:

Today, one of the toughest tales of the recession took another big step towards becoming a success story. General Motors relaunched itself as a public company, cutting the government’s stake in it by nearly half. What’s more, American taxpayers are now positioned to get back more than my administration invested in GM. That’s a very good thing.

In the last year, we’ve told GM’s management and workers that if they made the tough decisions necessary to make themselves more competitive in the 21st century—decisions requiring real leadership, fresh thinking, and also some shared sacrifice—then we would stand by them. And because they did, the American auto industry, an industry that’s been a proud symbol of America’s manufacturing might for a century, an industry that helped to build our middle class, is once again on the rise.

Our auto makers are in the midst of their strongest period of job growth in more than a decade. Since GM and Chrysler emerged from bankruptcy, the industry has created more than 75,000 new jobs. For the first time in six years, Ford, GM, and Chrysler are all operating at a profit. In fact, last week, GM announced its best quarter in over 11 years.

And most importantly, American workers are back at the assembly line manufacturing the high-quality, fuel-efficient, American-made cars of tomorrow, capable of going toe-to-toe with any other manufacturer in the world. Just two years ago, this seemed impossible. In fact, there were many doubters and naysayers who said it couldn’t be done, who were prepared to throw in the towel and read the American auto industry [its] last rites.

Independent estimates suggested, however, had we taken that step—had we given up—we would ahve lost more than one million jobs across all 50 states. It would have also resulted in economic chaos, devastating communities across the country and costing governments tens of billions of dollars in additional social safety net benefits and lost revenue.

That wasn’t an acceptable option, to throw up our hands and to quit. That’s not what we do. This is a country of optimistic and determined people who don’t give up when times are tough. We do what’s necessary to move forward. So these last two years haven’t been easy on anybody—they haven’t been without pain or sacrifice, as the tough restructuring of GM reminds us. And obviously, we’ve still got a long road ahead, and a lot of work to do to rebuild this economy, to put people back to work, to make America more competitive for the future, and to secure the American dream for our children and our grandchildren.

But we are finally beginning to see some of these tough decisions that we made in the midst of crisis pay off. And I’m absolutely confident that we’re going to keep on making progress. I believe that we’re going to get through this tougher and stronger than we were before—because just as I had faith in the ability of our auto workers to persevere and succeed, I have faith in the American people’s ability to persevere and succeed. And I have faith that America’s best days and American manufacturing’s best days are still ahead of us.

Watch video of the speech from CNN below.