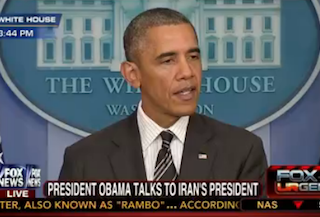 President Obama may not have been able to make an “encounter” in person with Iranian President Hassan Rouhani happen during the United Nations General Assembly, but on Friday afternoon he announced that he had just gotten off the phone with Rouhani. The phone call marked the first communication between an American and Iranian president since 1979.

“The two of us discussed our ongoing efforts to reach an agreement over Iran’s nuclear program,” Obama told the reporters in the room. “I reiterated it to President Rouhani what I said in New York. While there will surely be will surely be important on or obstacles to moving forward and success is by no means guaranteed, I believe we can reach a comprehensive solution.”

Obama expressed hope about the negotiations, which will be led by Secretary of State John Kerry. “The very fact that this was the first communication between an American and Iranian president since 1979, underscores the deep mistrust between our countries,” he said. “But it also indicates the prospect of moving beyond that difficult history.”

After acknowledging the conciliatory rhetoric coming out of Iran in recent weeks, Obama said “the test well be meaningful, transparent, and verifiable actions, which can also bring relief from the comprehensive international sanctions currently in place.” He said the United States has a “responsibility” to pursue diplomacy” and looked forward to a relationship between the two countries based on “mutual interest and mutual respect.”

Seconds before Obama approached the podium in the White House briefing room, Rouhani broke the news of the phone call himself on Twitter, saying he told Obama, “Have a Nice Day!” and Obama replied “Khodahafez,” a common way of saying “goodbye” in Persian. The literal translation is, “May God be your Guardian.” 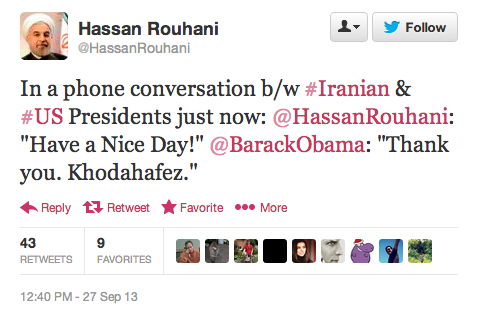