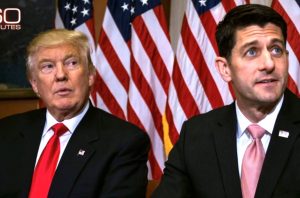 On Sunday night’s 60 Minutes, Paul Ryan opened up about how things have worked between himself and Donald Trump since the mogul became president-elect.

Scott Pelley interviewed the House Speaker, and he started by asking how much time Ryan and Trump spend talking everyday, and on what political subjects. When Pelley asked if Trump realizes that being president is different from being CEO, Ryan said the mogul understands the distinction, and that he intends to return powers that President Obama took away from Congress.

As the conversation progressed, Paul talked about how he patched up his rough relationship with Trump, and how their first mutual goal is to repeal and replace the Affordable Care Act. Ryan also said that he and Trump talked about how to promote economic growth while providing relief to industries stifled by regulation.

On the subject of illegal immigration, Ryan explained that he’s prepared to work with Trump after the mogul tweaked his stance from his previous statements. Ryan insisted that there wouldn’t be a deportation force, that law enforcement would focus on criminal aliens, and that a border security would happen, be it through a wall or other means.

The discussion went on to touch subjects including tax reform, infrastructure investment plans, and Ryan’s intent to change Medicare. While Ryan said he hasn’t talked with Trump about this yet, he argued that Medicare is on a trajectory for bankruptcy, and it will require extensive reform in order to remain solvent for future generations.

Towards the end, Ryan gave his honest opinion on whether he thought Trump would actually win, and promised that the mogul has his trust. Pelley ended up asking Ryan about how he reacts to Trump’s more bizarre statements, and whether he supports them even when they haven’t been proven true.