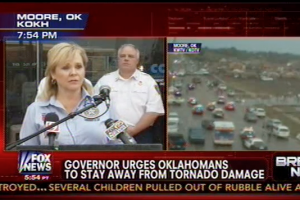 Oklahoma governor Mary Fallin and a number of state and local officials spoke at a press conference earlier tonight updating the public on the relief efforts going on in the wake of a devastating tornado that hit the Oklahoma City area, particularly the town of Moore. Search and rescue efforts are currently underway, and multiple times during the presser, officials invoked the last time Oklahoma was hit by a devastating tornado outbreak.

Fallin called this a “very sad day for the state of Oklahoma,” and said first responders will be working throughout the night to make sure everyone is accounted for and that there are no survivors that have not been recovered yet. Fallin thanked first responders and local law enforcement on the scene, as well as the hospitals caring for the injured.

Fallin commended the media for keeping the public informed about the rough weather conditions in the area, and said that there is no exact number count yet for the total number of fatalities and injuries. During the press conference, however, media outlets confirmed that the fatality count has now reached 51. And according to CNN, 20 of those fatalities were children.

Fallin and a number of other officials warned civilians to stay away from areas that have been hit the most while relief efforts are still underway. Oklahoma City manager Jim Couch told the public that they should be using water sparingly over the next day or so, and confirmed that power will be restored soon to those who have lost it.

Watch part of the press conference below, courtesy of Fox News: