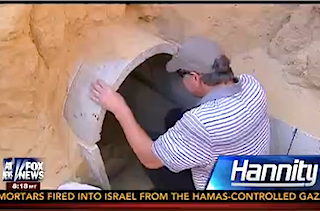 As you may have been able to tell from his Twitter feed, Sean Hannity is in Israel. The Fox News is reporting live from that country this week and for his show Monday night, he joined a spokesperson for the Israeli Defense Forces for a tour of one of many elaborate tunnel systems Hamas has built to move between Gaza and Israel.

Hannity marveled at how “extensive and sophisticated” the tunnels are and was disappointed to learn that it is Israeli cement and electricity that could be used to build schools and infrastructure but was instead diverted to use for the tunnel construction.

After negotiating whether to enter the tunnel “headfirst or feet first,” Hannity made his way into the narrow space before eventually finding himself able to stand up almost completely straight. “The construction overall, very solid,” an impressed Hannity said once he was making his way through the tunnel.

“This is cement that is incredibly valuable price-wise,” the IDF spokesperson said “And it’s going towards terror tunnels, rather than anything else.” When she projected that the tunnel cost $3 million to build, Hannity asked, “What happened to feeding the Palestinian people?”

“And this will go for another full mile into either a mosque or a hospital or a school?” Hannity asked.

“Exactly,” the Israeli spokesperson replied. “Into any kind of civilian location.”

On Wednesday, he will interview Israeli Prime Minister Benjamin Netanyahu and, judging by tweets like the one below, it seems unlikely he will feature any other perspectives:

Gaza. Just interviewed a woman in this border town hit with 6 rockets at 7:55 am today before cease fire began. pic.twitter.com/TOkAlilSpc

Watch the video below, via Fox: