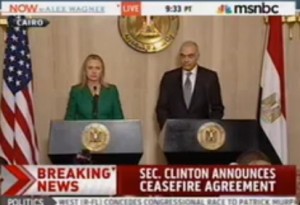 Secretary of State Hillary Clinton held a brief press conference Wednesday afternoon, at which she announced a ceasefire agreement between Israel and Hamas that puts an end to a week of violence in and around Gaza that has claimed 140 lives. Appearing with Egyptian Foreign Minister Mohamed Amr, Secretary Clinton said that the U.S. “welcomes the agreement today for a ceasefire in Gaza,” adding that “for it to hold, the rocket attacks must end,” and that “Now, we have to focus on reaching a durable outcome that promotes regional stability and advances the security, dignity and legitimate aspirations of the Palestinians and Israelis alike.”

Secretary Clinton began by thanking Egyptian President Mohamed Morsi “for his personal leadership to deescalate the situation in Gaza, and end the violence,” and added that “this is a critical moment for the region. Egypt’s new government is assuming the responsibility and leadership that has long made this country a cornerstone of regional stability and peace.”

“The people of this region deserve the chance to live free from fear and violence and today’s agreement is a step in the right direction that we should build on,” Sec. Clinton continued. “Now we have to focus on reaching a durable outcome that promotes regional stability and advances the security, dignity and legitimate aspirations of the Palestinians and Israelis alike.”

Other than a cessation of violence, Sec. Clinton didn’t talk about any other details of the truce, but said that this is a first step in a longer process. “Ultimately,” she said, “every step must move us toward a comprehensive peace for all the people of the region. As I discussed today with President Morsi, as well as Prime Minister Netanyahu and President Abbas, there is no substitute for a just and lasting peace.”

Hamas had been demanding an end to Israel’s blockade of the Gaza Strip, and an end to travel restrictions on Palestinians within the region’s borders, demands that have not, as yet, been met.