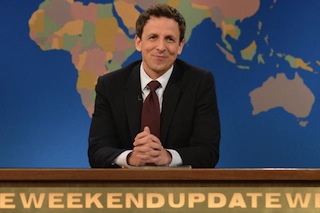 Tonight, Seth Meyers will say goodbye to Saturday Night Live, leaving behind the Weekend Update desk to take over Late Night from Jimmy Fallon later this month. Before he goes, here’s a look at some of his most memorable political moments, from SNL and elsewhere.

Rumors that Meyers would be producer Lorne Michaels‘ pick for the job surfaced as soon as Fallon’s ascension to the Tonight Show chair became official. While there has been plenty of grumbling that Meyers is too similar to Fallon, who also went from Weekend Update to Late Night, there is at least one thing that sets the two men apart.

While Fallon was always the goofy Weekend Update sidekick to the more grounded, satirical Tina Fey, Meyers has held his own as the solo anchor for the last several years. His ability to tackle political material, both as a writer and performer on SNL, goes beyond that of Fallon, whose political chops mostly extend to his expert impressions. Meyers’ knack for political jokes helped him land the White House Correspondents’ Dinner hosting gig in 2011, where he arguably outdid other late night hosts like Jimmy Kimmel or Conan O’Brien who are less-known for political comedy.

In his interview with The New York Times‘ Bill Carter that accompanied the announcement, Meyers said one thing he hopes to bring from Weekend Update to Late Night is the “two-shot” segments he does with “talented, funny people” playing characters, often political figures. Late night television is in desperate need of reinvention, and hopefully Meyers can use some of his political cred to bring a fresh perspective to NBC’s Late Night.

Editor’s note: This post has been updated and republished from an earlier date – Jon Nicosia