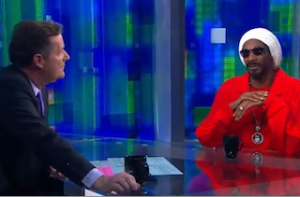 The artist formerly known as Snoop Dogg has been making some major changes in his life over the last year. As he explained to Bill Maher on last week’s Real Time, a trip to Jamaica altered his outlook on life, leading him to become a Rastafarian, change his name to Snoop Lion and start recording reggae music. This transformation also led Snoop to rethink he long and complicated relationship with guns.

In a preview from Thursday’s Piers Morgan Tonight, Snoop shared the inspiration behind a new song called “No Guns Allowed.” He explained to Piers Morgan that he went through a situation where authorities raided his house, took his guns and “put my family through a whole lot of unnecessary abuse.” After that, he decided he didn’t need guns in his life because he was feeling “positive and peaceful.”

At the same, he was hearing about the recent mass shootings in the country and wanted to “make some music to try to help the next person who was thinking about loading a gun and going to a school and shooting.”

Morgan asked Snoop why he thinks guns have become such a big “symbol of power” in America. Snoop described how he would see guns in movies when he was little and then started to see them in real life, with people he knew getting killed. “They say it’s better to be caught with, than without,” he said. “But once you get older, it’s better not to have one.”