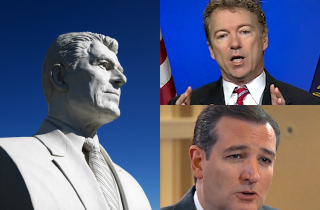 One consequence of the GOP’s Ronald Reagan fetish is occasionally the Gipper will be called into service on both sides of an intra-party skirmish, leading to the awkward situation of two Republicans quoting him at each other in support of opposing views.

Paul, on Meet the Press:

“I opposed with real fervor the involvement of us in Syria, and that became the dominant position in the country, both Republican and Democrat. There’s not one Republican who is saying we should put military troops into Crimea or into Ukraine, so I think I’m right in the middle of that position…I’m a great believer in Ronald Reagan. I’m a great believer in a strong national defense. In fact, what Ronald Reagan said in about one sentence sums up real a lot of what I believe. He said to our potential adversary, ‘Don’t mistake our reluctance for war for a lack of resolve.’ People knew that with Ronald Reagan.”

Cruz, on This Week With George Stephanopoulos:

“I’m a big fan of Rand Paul. He and I are good friends. I don’t agree with him on foreign policy. I think U.S. leadership is critical in the world. I agree with him that we should be reluctant to deploy military force aboard. But I think there is a vital role, just as Ronald Reagan did. When Ronald Reagan called the Soviet Union an evil empire, when he stood in front of the Brandenburg Gate and said, ‘Mr. Gorbachev, tear down this wall,’ those words changed the course of history. The United States has a responsibility to defend our values.”

The two aren’t that far apart, but only because they have the common enemy of Obama’s foreign policy, a convenient triangulation point that will vanish in the trenches of a GOP primary. Sure enough, those who stare into 2016 crystal balls for a living predict foreign policy to be a major challenge for the GOP in the next national election. (The subhead of that link: “The GOP Gap: No Ronald Reagans.”) If so, expect Reagan to be more present than ever on the debate stage, sometimes in support of multiple conflicting positions at the same time.