Watch The Entire CNN Team Lose It At 1:30 AM Waiting For Iowa Results
video

Watch The Entire CNN Team Lose It At 1:30 AM Waiting For Iowa Results 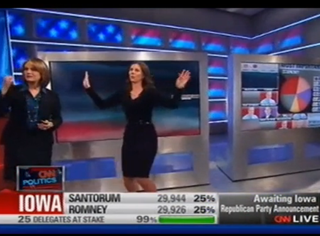 Do you remember those all-nighters in college, during finals period, where everyone would mellow out for a bit before heading out for a cup of coffee and then have a collective caffeine-induced laughing fit over nothing in particular? Prepare to get nostalgic, because that is apparently what happened to the CNN Election Center crew around 1:30 AM tonight as they waited for election results, and a Magic Wall mishap sent the show spiraling out of control.

As Erin Burnett tried to explain a pie chart showing the way voters had veered related to what they considered the most important issue, using her new Magic Wall move, “the flick.” The “flick” somehow did not get the pie chart onto the second screen as attempted until the third try, by which Burnett and Gloria Borger were cracking up.

Anderson Cooper seemed to sense that all was lost and asked, “have we all just given up?” to which Ali Velshi responded “it is evident from the social media screen that people are going to sleep.” For no apparent reason, this made Cooper explode in laughter. “Again with the social media screen? This is the third hit and I still don’t understand what the hell this thing shows!” Velshi then tried to explain– but not before telling Roland Martin to stop laughing. It didn’t really seem to stop him– or anyone else on the set– from laughing.

The delightful late-night segment via CNN below: