Watch The Five’s Incredibly Refreshing Segment on an Emotional Topic 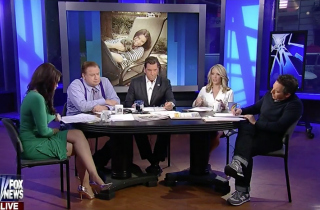 Given that our de facto motto is “We watch cable news so you don’t have to,” you won’t often find us publicly praising the medium. But sometimes it just feels necessary.

In the past, this very writer has described cable news as being “marred by prefab partisan shoutfests, confirmation biases, manufactured outrage, breathless fear-mongering, flash-in-the-pan controversies, unabashed speculation, self-promotional blowhards, and bizarre gimmickry.” Other times, the genre can be “refreshingly honest” and “thoughtful.”

Thursday’s mid-hour segment of The Five falls into the latter camp.

Cable news gabfests being cable news gabfests, you’d expect this segment to include some condemnation or mockery of Maynard’s decisions — especially considering shows like this often engage in finger-wagging cultural criticism. But The Five covered it in a truly refreshing way: All five hosts refused to pass judgment upon Maynard for her personal choices, instead offering compassionate and empathetic gestures of understanding, along with soft-spoken, solemn thoughts on suicide and the struggle with terminal illness.

“Personally, it’s not a choice I would want to make, but I don’t know if I have a right to tell anyone else what they should do,” Dana Perino began. Yes!

Kimberly Guilfoyle chimed in by speaking earnestly and frankly about her own experience watching family and friends suffer through terminal illness. She reminded viewers that the terminally ill grapple with incredibly difficult questions about whether it’s worth “being a burden” to your family and to yourself. Heavy stuff.

“This is her decision,” Guilfoyle added. “I would never even put myself in her position to pass judgment as to what she should do.”

Bob Beckel shared his experience with loved ones who suffered from inoperable liver cancer — one committed suicide, the other stuck it out only to face immense pain. “I think, in a situation like this, people have every right in the world to decide whether they want to go to their maker or not,” he asserted.

Having lost his mother, father, and sister to cancer, Eric Bolling forcefully agreed. “If anyone had every said, along the road, that they wanted to have an assisted suicide,” he said, “I would have been on-board.” Painful and honest.

“If a person wishes to die peacefully, not in agony, who are you to stand in their way?” Greg Gutfeld said before offering up the most thought-provoking take of the segment: “Suicide as a crime, I’ve never understood. How is that a deterrent? You can’t put me in jail after I’ve already jumped off the cliff, so I never quite understood the crime.”

When cable news conversations veer away from the usual partisan sniping and into human territory — one with actual emotions and deep personal connections rather than performance-artist punditry — it becomes a truly compelling medium.