Rothman: Watch the Moment When Ron Fournier Got ‘Sick of Defending Obamacare’

Rothman: Watch the Moment When Ron Fournier Got ‘Sick of Defending Obamacare’ 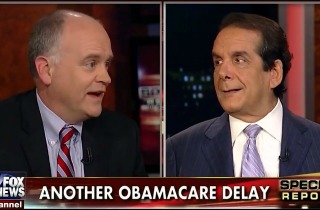 It’s a rare moment in politics when you can identify the precise moment in which a tide begins to turn. One such event occurred on Monday night on Fox News Channel’s Special Report. There, National Journal columnist Ron Fournier lost the faith.

Fournier has been around a while. The former Washington Bureau Chief for the Associated Press has been covering politics since 1985, when he established himself as a local reporter in Arkansas – a station that positioned him well to jump into national politics when his adopted home state’s governor ascended to the presidency just eight years later.

Like so many political columnists inside the Beltway, Fournier regularly exhibits a devotion to even handedness. With a near pious commitment, no criticism of the Democratic Party can be issued without a commensurate nod to the faults and foibles of the Republican Party, and vice versa. Maintaining cross-partisan appeal is an aspect of being considered credible, and the opinion columnist is undone if he no longer commands the authority conveyed by bipartisan influence.

Which makes Fournier’s more recent admission that much more stark. It is the first crack in the dam which portends a great flood.

Taking stock of the most recent delay in the implementation of the Affordable Care Act, the 27th such delay since the law was passed almost four years ago, Fournier and columnist Charles Krauthammer engaged in a spirited exchange over whether this most recent delay in the employer mandate for medium-sized employers was a “lawless” maneuver by the executive.

That is, it was a spirited exchange on Krauthammer’s side. Fournier’s performance was slightly more perfunctory, and it showed. He offered a defense of the White House’s actions that he might have, given time, convinced himself to believe. Anyone of Fournier’s demonstrable intellect can convince themselves of just about anything, but he was unprepared just then to mount a convincing defense of this latest, blatantly political, maneuver by the administration:

In time, as passions cooled, Fournier reflected on that exchange. In a column published this morning, the National Journal opinion writer confessed that he was “getting sick of defending Obamacare.”

“It’s getting difficult and slinking toward impossible to defend the Affordable Care Act,” he wrote. “The latest blow to Democratic candidates, liberal activists, and naïve columnists like me came Monday from the White House, which announced yet another delay in the Obamacare implementation.”

After noting that the ACA has imposed a heavy burden on employers which was thus creating a political problem for the White House, Fournier confessed that it was simply not credible for the administration to contend that this latest delay was anything more than an attempt to mitigate the damage Democrats are likely to suffer at the hands of voters in November.

“The White House has politicized its signature policy,” he lamented.

“Even the law’s most fervent supporters are frustrated,” Fournier concluded. “Put me in the frustrated category.”

The columnist admits that he supports the goals of the ACA and has, at times, defended the means the White House has embraced to relieve the stresses millions experience when they need to access health care in the United States. But, in spite of the administration’s “good intentions,” their actions are “almost indefensible.”

The White House has “almost” lost Ron Fournier. This well-respected columnist — who is as likely to find himself on the set of On the Record with Greta Van Susteren as he is on Morning Joe — is as close as you get to a political opinion leader. The cracks are starting to show. A flood is coming.