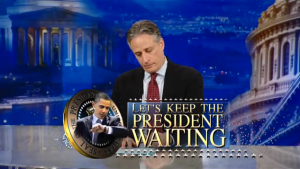 Last night, before it aired, we reported that The Daily Show had had to retape the opening of last night’s episode with President Obama to make way for time constraints. With their usual speed, the show’s official website now has the excised moments online and, judging by the reaction that the interview has gotten, it’s probably a good thing this bit was left on the cutting room floor.

That’s not to say that it isn’t funny. It is. Very much so. In the original opening to the show, Jon Stewart claimed his guest would be “the White House Chairman to the Council of Economic Adviser Austan Goolsbee’s…boss” (a reference to how he introduced Goolsbee the night before), and then proceded to showcase a new segment entitled “Let’s Keep the President Waiting.” He then did just that, twiddling his pen, playing with a paper football, and sifting through a bowl of candy for about 30 seconds before finally bringing out Obama. It was easily the most mileage a TV show host has gotten out of doing nothing since Conan O’Brien practiced spinning his wedding ring on his desk to kill time during the writers’ strike.

Funny though it was, these clips would have been further gas for the “How Dare Our President Sully Himself on a Network with ‘Comedy’ In the Title?” flame. With people writing articles furiously asking how Stewart could dare to call our president “dude” (obviously the worst thing anyone has ever called Obama in the history of everything ever), chances are good that a few seconds of the Daily Show host doing silly voices before interviewing the Commander in Chief would have been tantamount to treason.