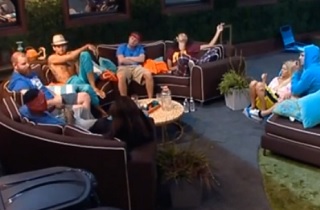 Long-running CBS summer reality show Big Brother has been in the news recently, and not just for the amazing feat of still existing. When racist and homophobic comments were taken from the show’s live feed and publicized on the internet, two of the contestants were fired from their In Real Life (IRL) jobs, and another was denounced by his. CBS addressed the controversy in a press release calling the remarks “offensive,” and, on Sunday night’s episode, by airing some of the comments. As offensive as those were, there are a whole lot more that have been captured from the show’s live video feed.

Twenty-two year-old Aaryn Gries and 32 year-old GinaMarie Zimmerman, contestants on Big Brother’s 15 season, each lost their jobs when their racist and homophobic comments came to light. Gries was dropped by her modeling agency, while Zimmerman was let go from her job as a beauty pageant coordinator. Arkansas railroad conductor Spencer Clawson’s company denounced him in a statement for offensive comments he made, but noted that “Union Pacific is acting in accordance with Collective Bargaining Agreement terms regarding Mr. Clawson.”

Last week, CBS issued a statement to The Hollywood Reporter, which read “”Big Brother is a reality show about watching a group of people who have no privacy 24/7 — and seeing every moment of their lives. At times, the houseguests reveal prejudices and other beliefs that we do not condone. We certainly find the statements made by several of the houseguests on the live Internet feed to be offensive. Any views or opinions expressed in personal commentary by a houseguest appearing on Big Brother, either on any live feed from the House or during the broadcast, are those of the individual(s) speaking and do not represent the views or opinions of CBS or the producers of the program.”

On Sunday, Big Brother aired what amounted to less than a minute of the offensive comments, which included many examples of Gries taking racist shots at Asian contestant Helen Kim, and Zimmerman calling gay contestant Andy Herren “that queer.” The show also included a tag-team of Zimmerman saying, of black contestant Candice Stewart, “Candice is on the dark side because she’s already dark,” and Gries adding “Be careful what you say in the dark, might not be able to see the bitch.”

The comments that CBS aired, however, are just the tip of the iceberg. Several websites have kept lists of the offensive remarks taken from the live feed, and one enterprising Youtuber collected them all, so far, into an 11-minute compilation. The language is frequently foul, as well as racist, homophobic, and misogynistic. It’s also occasionally self-aware, as when Clawson says he’s thinking of something to say to “add to my bigot reel.” For a real “treat,” hang in until the end, when a group of five contestants jokes around about murdering another contestant, and raping her dead body, punctuated by Clawson explaining “Everybody knows that ‘no’ means ‘keep trying.'”