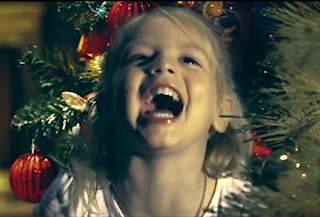 If you thought Sarah Palin was the fiercest fighter in the war against the War on Christmas, think again. The four-year-old girl who stars in a new ad that’s been popping up on Fox News and MSNBC over the past week has Palin beat.

The ad, which was produced by St. Mary’s Parish of Barnegat, New Jersey, features a young girl only identified as “Amy” who goes from smiling to frowning to screaming to laughing over the course of 30 seconds as the voiceover warns that “not everyone is OK” with her celebrating Christmas. The full narration reads:

“This is Amy. She lives in America. She’s free to smile to show she’s happy. Everyone’s OK with this.

Amy is a Christian. She’s also free to celebrate the birth of Jesus Christ to show she’s happy. But not everyone is OK with this.

We are one nation under God. No man owns Amy’s happiness. No man will define how she shows it.”

If you live in New York or New Jersey and watch a lot of cable news, chances are you’ve seen the ad. If not, you’re in for quite a treat. Is this a genuine fight against the War on Christmas? Some elaborate form of satire in the vein of Stephen Colbert‘s “Blitzkrieg on Grinchitude”? Either way, it should help inspire/amuse you this holiday season.