Watch Trump Make His Anti-Iran Deal Speech All About Him 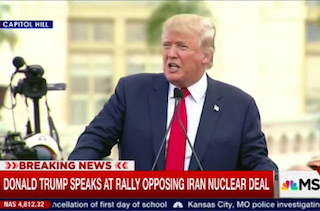 Speaking for an uncharacteristically short five minutes at today’s anti-Iran nuclear deal rally in Washington, D.C. on Wednesday, Donald Trump briefly touched on his opposition to the agreement before launching into a more general stump speech about what a fantastic president he will be.

“I’ve been doing deals for a long time,” Trump said at the top of his remarks. “I’ve been making lots of wonderful deals, great deals, that’s what I do. Never, ever, ever in my life have I seen any transaction so incompetently negotiated as our deal with Iran.”

“If I win the presidency, I guarantee you that those four prisoners are back in our country before I ever take office,” Trump said of the four American citizens currently being held in Iran. “I guarantee that. They will be back before I ever take office because they know that’s what has to happen, OK? They know it. And if they don’t know it, I’m telling them right now.”

And just like that, he delivered his campaign slogan, “We are going to make America great again” and left the stage.