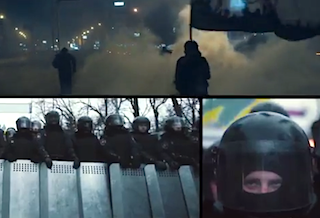 VICE Media captured national attention in a big way this year when it orchestrated Dennis Rodman’s fateful trip to North Korea for its HBO documentary series. In 2014, the company plans to make an even bigger mark on the media by launching VICE News, which aims to challenge traditional 24-hour cable news much in the same way that Al Jazeera America has done since it started broadcasting earlier this year.

So far, VICE News is just a website, trailer and YouTube channel, but it seems to promise a much larger operation within the next year. As the trailer indicates, VICE excels at revealing global stories that other news outlets are too cautious to touch, in places like Liberia, Venezuela, and especially North Korea.

In her April 2013 profile of the company, The New Yorker’s Lizzie Widdicombe reported that VICE “plans to create a ‘twenty-four-hour global news channel,’ by turning its foreign offices into news bureaus that will report, in real time, on events in their regions. Vice is opening bureaus as quickly as traditional-media organizations are closing them.”

“It used to be, back in the day, that news was the most profitable of all shows that the networks did,” VICE founder Shane Smith told Widdicombe. “The Gulf War built CNN. There’s a lot of conceptions that news doesn’t make money, that young people don’t care about news. But young people obviously care about news—that’s why we’re successful. I know it sounds crazy, but let’s say, hypothetically, you become the default source for news on YouTube. You get billions of video views, [investment partner] WPP monetizes it. Then you are the next CNN.”

Since that interview ran, News Corp. chairman Rupert Murdoch acquired a 5% stake in VICE with a $70 million investment, meaning he could be helping to back Fox News’ newest competitor in 2014.

VICE’s main YouTube channel has amassed nearly 4 million subscribers since it launched in December 2005. As of Friday afternoon, VICE News has 346.

Watch the trailer below, via VICE: