Kamala Harris Tells Mika Brzezinski 'I Eat No for Breakfast' 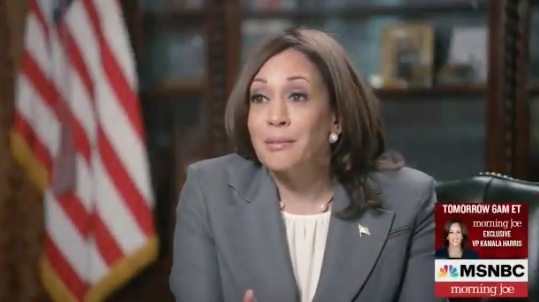 This curious boast comes from a recent interview in which VP Harris joined Mika Brzezinski to discuss inclusive capitalism, gender equity and more in an exclusive interview see to air tomorrow, June 1, on MSNBC’s Morning Joe. A portion of the segment aired Monday.

Brzezinski set up the interview by revealing the discussion on “how the administration plans to get American workers back on track, particularly women,” but set up the clip with “She also shared her advice to women embarking on a career. This is what she tells those she mentors.”

“I eat no for breakfast,” Vice President Harris replied. “So have I been told many times during my career things from ‘you are too young, it’s not your turn, they are not ready for you, no one like you has done it before.’ I have heard all of those things many times over the course of my career, but I didn’t listen.”

She then concluded by encouraging “anyone who has been told that, whatever their gender to not listen, because again, don’t be encumbered by the inability of others to see the potential of who you are. She added: “It’s really important to recognize the limitations that other people have based on their expectations and to not impose that on one’s self.”

Coming up tomorrow: Our exclusive interview with @VP pic.twitter.com/B3xB8ygWnO

Brzezinski’s “Know Your Value” initiative is a nationwide movement in partnership with NBCUniversal to support an empowered and inclusive community for women in business and in life. In a preview that aired earlier this morning, Harris shared her advice to women embarking on a career.

Harris received harsh criticism from conservatives on Twitter for wishing her followers a nice long Memorial Day weekend without mentioning any veterans who perished. Those same critics, however, did NOT condemn former President Donald Trump’s Memorial Day message that complained about gas prices and also neglected to mention those who gave the ultimate sacrifice in serving the United States.