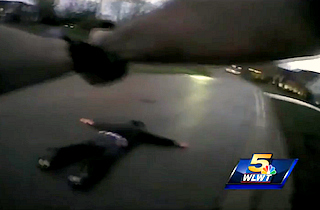 Cincinnati Officer Jesse Kidder’s body camera caught a confrontation between the officer and a suspect who was potentially trying to compel a “suicide by cop,” in which someone provokes a police officer into killing them.

Kidder, a 27-year-old rookie officer, is being praised for his restraint in the situation.

“He jumped out and he sprinted towards me,” Kidder said. “I had my firearm already drawn on me, and I told him to put his hands up in the air and he was screaming as he was yelling, ‘Shoot me, shoot me.'”

Kidder was able to talk the suspect down until backup arrived. The suspect, who had allegedly just murdered his fiancée and was reported to be armed, was taken into custody unharmed.

“Law enforcement officers all across the nation have to deal with split-second decisions that mean life or death,” Kidder said. “I wanted to be absolutely sure before I used deadly force.”

“For him to make the judgment call that he did shows great restraint and maturity,” his chief said. “This video footage, it eliminated all doubt that this officer would have been justified if in fact it came to a shooting.”

If you’re about to say “good thing cops are using body cameras now,” slow thy roll: Kidder brought the camera from home. His department says it hopes to get funding to supply the rest of the officers.

Watch the clip below, via WLWT: