Watch Will Ferrell And Jimmy Fallon Sing About Their ‘Tight Pants’ 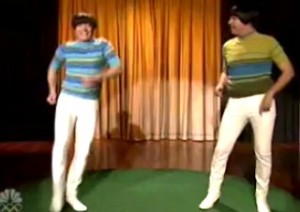 All of a sudden, Fallon crashed the party with his own tight pants, which did not sit well with Ferrell — who claimed he was the only one who could wear tight pants.

“Now you listen to me, you sick son of a bitch! I don’t know who you are or where you came from. I’m the only one in this town that can wear tight pants, I will end you” Ferrell fumed. “Don’t wake the snake! Hisssssss!”

Watch Ferrell and Fallon shake their groove thing in their tight pants below via NBC:

Fallon also interviewed Ferrell later in the show as well, watch below: