Wayne LaPierre Blasts Bloomberg On Guns, Calls Him ‘Insane’ And ‘Reckless’ On NBC 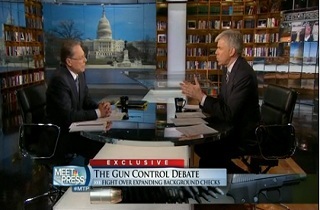 NRA Executive Vice President Wayne LaPierre lashed out at a wide range of the political opinions held by New York Mayor Michael Bloomberg on NBC’s Meet The Press this morning. LaPierre told host David Gregory that he thinks Bloomberg is ‘reckless’ and that he won’t beat the NRA because of its grassroots support.

Bloomberg announced last night that he will spend $12 million of his fortune to run anti-gun ads around the country. LaPierre told Gregory that the NRA is not intimidated by these plans because of their vast grassroots and small donor support from around the country. “We have people all over, millions of people, sending us 5, 10, 15, 20 dollar checks telling us to stand up to this guy that says that we can only have three bullets, which is what he said. Stand up to this guy that says ridiculous things like, ‘The NRA wants firearms with nukes on them.’ I mean it’s insane the stuff he says,” LaPierre said.

Gregory challenged LaPierre on his position on background checks, citing a poll that shows over 85 percent of gun owners support them. LaPierre dismissed the suggestion that he is out of step with gun owners by opposing them, calling the thinking surround the legislation “a dishonest premise.”

Watch clip below via NBC