WDBJ Station Manager: ‘Not Sure Whether I Want Him to Live or Die’ 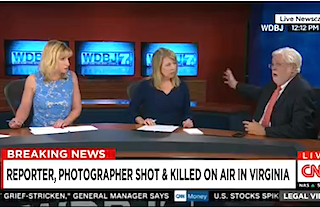 In the aftermath of this morning’s deadly on-air shooting of WDBJ reporter Alison Parker and cameraman Adam Ward, the station has been both reporting and grieving live. And just after noon on Wednesday, station manager Jeff Marks reacted to the news that suspect Vester Flanagan, who used the name Bryce Williams on air when he worked for the channel, had shot himself but was still alive.

“I’m going to step out of my role as a former journalist and say I’m not sure whether I want him to live or die,” Marks said. “If he dies, then he took the coward’s way out. And if he lives, he goes on trial and goes to prison for the rest of his life.”

“I’m speaking way out of turn, but I think I’m expressing what viewers think and what the co-workers of Alison and Adam think,” he added. “If he lives, he’s due due process — and this could all be a mistake, but I doubt it. We’re hurt enough that we want to express our anger and love for Alison and Adam.”

“On behalf of all of us at WDBJ7, I wanted to let that little bit of anger out and that whole lot of love out and say I want to thank you all for the professional way in which you have covered this story today,” Marks told the two anchors who have been reporting the story today.