We Should Ridicule Duck Dynasty Star’s Views on Homosexuality; But Suspend Him? Come On.

We Should Ridicule Duck Dynasty Star’s Views on Homosexuality; But Suspend Him? Come On.

Kirell: We Should Ridicule Duck Dynasty Star's Views on Gays; But Suspend Him? Come On.
Twitter share button 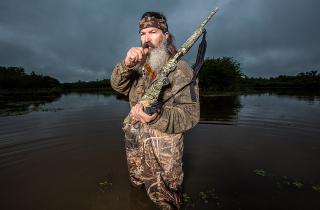 Hours after we reported that Duck Dynasty star Phil Robertson dropped some illogical “logic” on homosexuality during his GQ interview, his home network A&E decided to indefinitely suspend him from the show.

While Robertson’s comments were hilariously ignorant, they were predictable — especially given his family’s socially-conservative, Bible-loving image. Suspending the lead character for his wholly predictable comments is not only an overreaction but a gross misstep.

To recap: The Duck Commander patriarch remarked to the men’s magazine that homosexuality is on par with bestiality, and used fifth-grade “logic” to imply that homosexual men should give up their ways of choosing a “man’s anus” over the female vagina, which has “more to offer” and is clearly more “desirable.”

Of course, such comments neglect that homosexual men are not sexually attracted to a woman’s vagina, and thus his “logic” is flawed. And it’s not as simple as flicking a switch and telling a gay man to suddenly want to sleep with women.

But either way, suspending Robertson for these comments is ridiculous.

The Duck Dynasty brand is down-home social conservatism and Bible worship. Many people tune in for the stars’ humor and fearlessness; but many Americans appreciate their value system (however many of us may disagree with it).

A&E knew what they were getting when they put Robertson and his clan on the air, and they shouldn’t act surprised when the patriarch freely expresses his opinion on sensitive matters like homosexuality. No one tunes into Duck Dynasty expecting “enlightened” “east-coast” thought on matters of sexuality; and we shouldn’t be so outraged when Robertson says exactly what you’d expect him to say as to silence him.

Speaking out and ridiculing Robertson’s views on homosexuality is a much more effective way of changing the culture than forcing him to shut up and sit in the corner.

All this A&E suspension does is give ammo to the culture warriors like Fox’s Todd Starnes or AFA’s Bryan Fischer who genuinely believe there is a “gay agenda” coming after “good Christians” in popular culture. While they inflate that so-called “war” to a hilarious degree, this sort of incident gives them unwarranted credibility for the next time they cry wolf.

If we want to change attitudes about homosexuality, it’s probably best not to advocate for the silencing or suspension of every single backwards thinker. Instead, we should have a rigorous debate and allow rational, humanistic thought to prevail over the reductive, knee-jerked anti-gay rhetoric of social conservatism.